Instagram, the social networking service that enables its users to take pictures and videos, apply digital filters to them, and share them across Facebook, Twitter, Tumblr and Flickr, is becoming increasingly popular. A free application that can be downloaded onto mobile phones and tablets, Instagram currently has a predominantly young adult audience and increasingly non-profit organisations and political parties as using it more and more as a tool to generate an interested and engaged following for their campaigns. 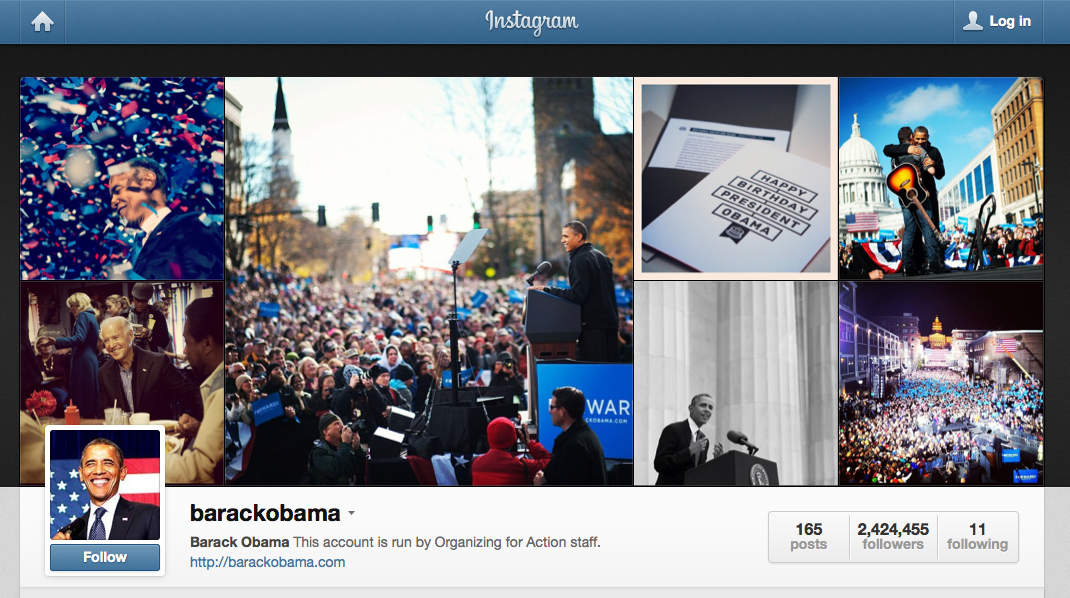 As a visual medium, many researchers may feel that Instagram will not fit well into their online communication strategy, which focuses on words, academia, nuanced research terms and ideas…But I believe it could prove to be a handy weapon in any communication campaign’s social media arsenal. With Instagram’s user base growing at an exceptional rate, having hit 100 million earlier this year, triple its user base since Facebook acquired the startup for $1 billion in 2012 (Fast Company, July 2013) it is certainly not one to be ignored.

Instagram encourages users to make tags both specific and relevant, rather than tagging generic words, in order to make photographs stand out and to attract like-minded Instagrammers. Much like Twitter, therefore, you can set up tags for specific events and projects and share them with your followers in order to generate discussion and debate around a particular image.

Steve Rubel in his blog The Revolution Won’t Be Televised; It Will Be Instagrammed, categorises the three reasons that he believes images are increasingly becoming the way in which people are sharing and consuming information online: 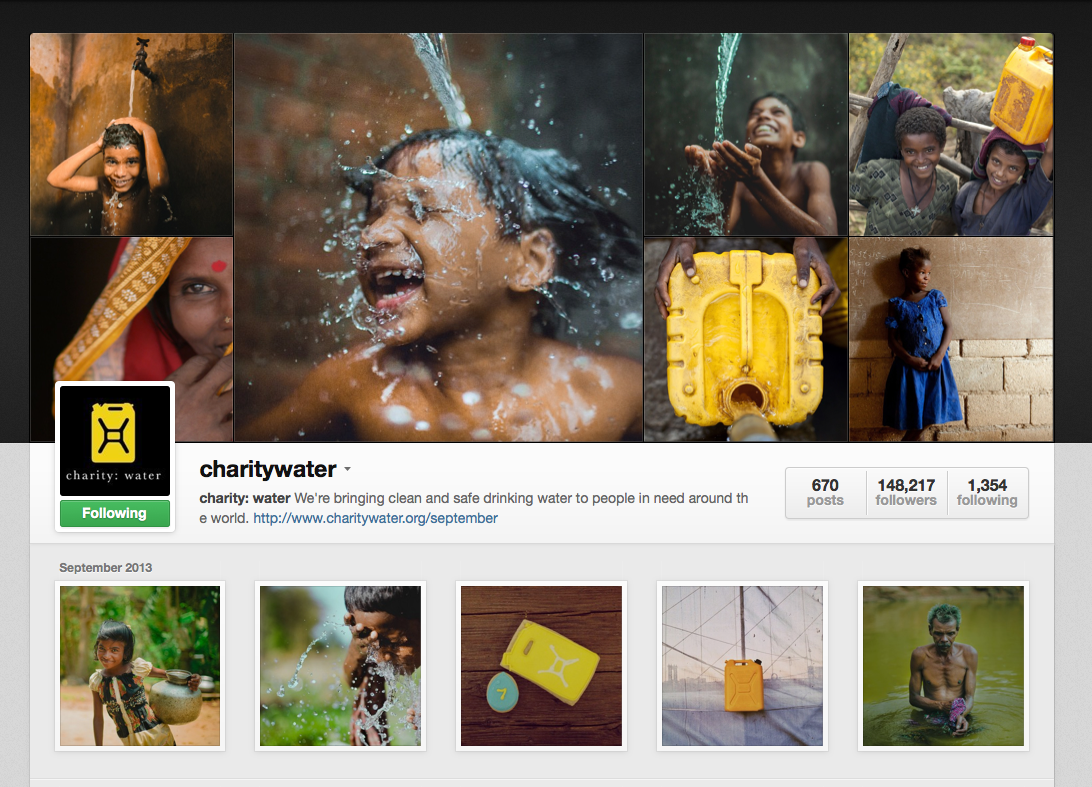 These images show how one organisation, Charity: Water is using Instagram on a daily basis to engage with their followers. Paul Young, Director of Digital Art at Charity: Water, described their tactical decisions behind  their use of Instagram in an interview for osocio.org:

“…charity: water is an early adopter brand and we pride ourselves on being deeply ingrained in the social web…Instagram gives us one more avenue to put content in front of people and hopefully make an impact on them. I love the thought of someone riding the bus to work and thumbing through their Instagram photos, to suddenly be transported into the developing world through images of people celebrating access to clean water.”

I’m sure they are out there, but I couldn’t find any individual researchers currently utilising Instagram to showcase their work and share it with the world, however there are a number of high profile research organisations that are already using it to build a following. For example, NOAA Fisheries; science-based conservation and management for sustainable living marine resources and healthy ecosystems, the Mars Curiosity Rover with ‘unofficial, un-retouched’ photos from the Mars Science Laboratory, “Curiosity”, General Electric with ‘groundbreaking research and technology that GE has been developing since the days of Edison’ and The National Geographic are all sharing amazing images of cutting-edge research. 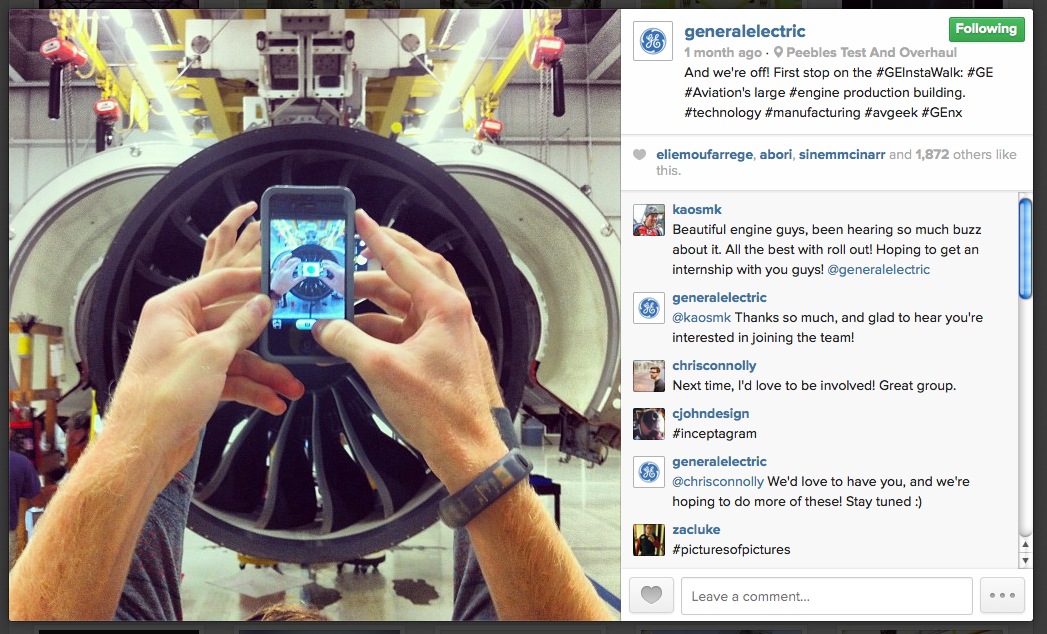 Instagram recently incorporated video sharing, allowing its users to record and share videos lasting for up to 15 seconds and rivalling Twitter‘s Vine video-sharing application. This opens up new possibilities for researchers to summarise and capture their research ideas. Although 15 seconds seems like an incredibly brief amount of time to communicate effectively, some scientific research organisations have stepped up to the challenge and produced some brilliant short videos sharing the research they are doing. NASA Goddard, the official Instagram account of NASA’s Goddard Space Flight Center, has posted a number of videos showing, for example, satellite images to show the complex interactions within the membrane surrounding Earth and Orbital Sciences Corporation’s Cygnus cargo craft launching aboard the company’s Antares rocket from NASA’s Wallops Flight Facility on a demonstration mission to the International Space Station (ISS). Alternatively, the Department for International Development’s Instagram account recently captured a short video clip of Justine Greening on new support for Syria following talks at the UN General Assembly in New York, 25 September 2013.

It seems only a matter of time before more and more independent, individual researchers begin recording and sharing their own research and building up a following on this platform…I would love to hear about anyone sharing their work in this way.

Partner with Us Are you an institution looking to increase your impact?

This Week's Most Read

Research to Action (R2A) is a website catering for the strategic and practical needs of people trying to improve the uptake of development research, in particular those funded by DFID.

We have structured the site and populated it with material that we think will be immediately useful to this audience, but also to development researchers in general who would like to be more strategic and effective in their communications.

R2A is produced by a small editorial team, led by CommsConsult. We welcome suggestions for and contributions to the site.